Amy started her dental career at the ripe old age of 17 in the filing room of a pedo practice. She was then hired to work in a general practice during the summer and Christmas break. There she learned all aspects of dentistry, but her main gig was handling all duties at the front desk. After completing her degree in psychology, Amy began working full time in the same practice, where she was introduced to the Brady Group systems. Yes, she sat in your chair and had all of the same challenges and questions you deal with every day, and was able to experience 3 years of coaching with Dr. Brady from the perspective of the dental practice.

As a result of successful implementation of Brady Systems, Amy accomplished many things with the support of the Brady Group. Among the changes she experienced was a significant decrease in A/R through pre-payment and effective use of outside funding. When starting with the Brady Group, she was sending out over 300 statements every month. The last time she ran statements there were 12! The practice she was a part of experienced greater case acceptance, more referrals, and more production per patient. They took 6 weeks of paid vacation every year and earned additional income as part of the profit-sharing system. Amy became a believer – it not only changed the practice, but the systems and principles changed Amy’s life.

After 9 years in the same general practice, Amy moved several miles away. She worked in a prosthodontist practice on a temporary basis for a friend that was on maternity leave. When she started, there were 3 people working at the front desk. With some organization and simplification of systems, Amy was running the front desk by herself in a $3M/year practice after 6 months.

Amy’s Role in the Brady Group

Amy has been working with Dr. Chris since 1999. She is not only our lead personal coach, but teaches many Brady Group events and contributes to the writings on our blog and support materials. Whatever your challenge, Amy has most likely lived and overcome what you’re dealing with in the dental practice.

Amy is more than just a coach for you and your team. She takes pride in developing relationships and getting to you know those she works with – and not just in the dental realm, but on a personal level as well. She can relate to your team members as a peer and is seen as an extension of the team, not a critic. She has a perspective and insight that leaders sometimes just can’t see.

Team Williams set a new record for additional earned income (aka bonus)! Each full-time member earned $17,418.94 in addition to their salaries. This year blew away last years total of $4,065.81. Amazing what you can do with a small, motivated and highly talented team! (Read More)

GET OUR FREE REPORT 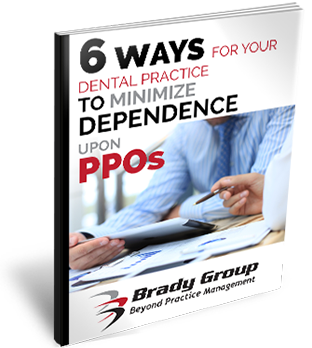 DENTISTRY IS A VERY UNIQUE BUSINESS

We believe dentistry is a very unique business
and is best played as a “team” sport.